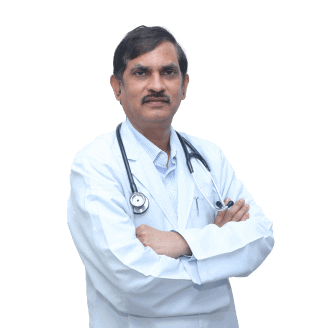 Dr Gulla Surya Prakash has been a Cardiology Specialist in Hyderabad for over 27 years. He holds the following, A graduate of Andhra Medical College, Visakhapatnam (1983), M.D. (Internal Medicine) from the All India Institute of Medical Sciences, New Delhi (1988), DM (Cardiology) from the Nizam's Institute of Medical Sciences, Hyderabad (1995), Fellow of Society for Cardiovascular Angiography and Interventions (FSCAI) (2012), Fellow of the American College of Cardiology (FACC) (2014), and an MBA (Homecare Administration) (2018).

Due to his performance in the competitive examination in Microbiology during 1981-82, he has been awarded the Rao Bahadur Dr. C. Rama Murthy Memorial Prize in Bacteriology. Dr. P. Kutumbaiah Prize in Clinical Medicine for achieving the highest mark in the competitive examination in Medicine in 1983. Having obtained the highest mark in the Clinical Surgery competitive examination in 1983, the Kirlampudi Gold Medal was awarded. Also received the ""Vaidya Ratna Award"" from Akkineni Foundation of America on 20th December 2015, during the 2nd Annual Award Gala of Akkineni International. In 2016, he received UGADI PURASKAR Award for his meritorious services in the field of health care from Vamsi International Cultural Seva Sangam. The Honorable Union Minister of Civil Aviation Shri Ashok Gajapati Raju and the Vizianagaram government officials congratulated Dr. Prakash on the eve of Vizianagaram Utsav 2016 celebrations for his highest achievements in the field of Medicine. He received the UGADI PURASKAR Award from Sri Kunijeti Rosaiah, Former Governor of Tamil Nadu, in recognition of his services to the society in the year 2019.